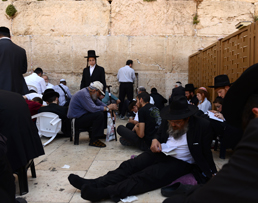 This is a time of heavy mourning, even though thousands of years have passed since the destruction of both Temples. If this seems remote, then it is time to relate the story of Napoleon. One day, Napoleon was out and about exploring his vast kingdom. Suddenly, he heard lamenting and wailing. The great conqueror followed the sounds of the sobbing, and soon enough he found himself in the Jewish ghetto in front of a Jewish synagogue. From the windows of the Shul, he could hear the anguished cry of so many people. Napoleon peered in, and the whole situation looked very wrong to him. There were grown men sitting on the ground. They sported overgrown hair, they clutched little books and they were crying fiercely. Napoleon fancied himself a fair ruler, one with compassion, and he now wanted to display that trait. Here were some of his own citizens, and they seemed awfully upset.

And so, the French ruler began to ask them questions. “What tragedy happened to this community?” he wondered. The answer he received was that their great Temple had been destroyed. “Who destroyed it?” he inquired. “Why, the Romans!” was the rejoinder. “When did they do this injustice?” asked Napoleon. He thought the pain must have been recent, as the mourning was so great. The answer, when given, floored him. More than a thousand years had passed, Napoleon learned, and still, the Jewish nation mourned their Temple! Legend has it that Napoleon concluded, “A nation that mourns with such angst so many years after their Temple was destroyed is a nation that will surely never disappear…and will certainly rebuild their Temple one day.”

Twelve days into the three weeks, we begin a separate set of even sadder days, known as “the Nine Days”. Aaron the Priest died on this day. Mshenichnas Av, Mima’atim B’simcha. When the month of Av enters, we lessen our happiness.

Restricted Activities During The Nine Days

The final nine days of the three-week period is when the mourning becomes intensified. This period begins on Rosh Chodesh Av and concludes on the Ninth of Av. All prior restricted activities remain, and a few more are put in place.

Laws Of Erev Tishah B’Av
The laws of Tisha B’Av are the most severe of all. Some of these rules go into effect after midday on the day preceding Tishah B’Av. Some authorities prohibit the study of Torah now, save for the parts that center around mourning and the destruction of the Temple. After midday, strolling for pleasure is prohibited. Toward the end of this day, a meal is served called the Seudah Hamafsekes. It is a sorrowful meal, to demonstrate our profound sadness for the loss of the Temple. At this meal, we sit on the floor, sitting apart from one another. Many have the custom to eat plain bread and a hard-boiled egg, and they dip their bread in ashes. One may not eat more than one cooked dish at this meal, which is why those who eat a boiled egg may not eat any other cooked dish.

We are told that “mishenichnas Av, Mima’atim B’simcha”. We tone down our joyousness during this month. During the Nine Days: