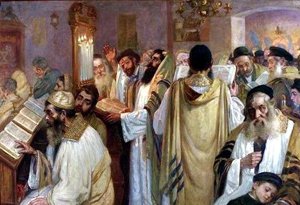 Yom Kippur begins with a unique prayer that is really a declaration known as Kol Nidrei. But before Kol Nidrei is recited, the Chazzan chants a prayer that states that both up in heaven, as well as down here on earth, everyone is invited to participate, even transgressors who may have been excluded from the synagogue throughout the year. This teaches that even one who managed to cut himself off from his spiritual life source is salvageable through the power of sincere repentance.

Then comes the thrice-repeated declaration of Kol Nidrei. This paragraph, which begins at a low volume and becomes increasingly louder with each repetition is chanted by the Chazzan and the congregation together, while a “bais din” of three people stands near the Chazzan at the front of the synagogue holding Torah scrolls. This prayer declares that any vows or promises made of our own volition are to be annulled. Various forms of oaths are enumerated, including vows, consecrations, and more. After this prayer, the men holding the Torah scrolls circle the shul and everyone kisses the Torah scrolls.

It is important to remember that the Kol Nidrei prayer only refers to those oaths that we took “al nafshana” – on ourselves. Vows, however, that were made between us and others cannot be absolved through Kol Nidrei.