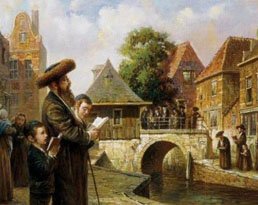 After Mincha on the first day of Rosh Hashana there is a custom to recite Tashlich near a body of water, preferably one that contains life in it, like an ocean or lake. We recite prayers that can be found in the Rosh Hashana Machzor, and symbolically demonstrate that we are ridding ourselves of ours sins by asking G-d to heave them into the watery depths where they will never be dredged up. If there is no water in walking distance on Rosh Hashana, one may postpone the recital of Tashlich to a later time during the Ten Days of Repentance, or until Hoshana Rabbah if an earlier time isn’t possible.