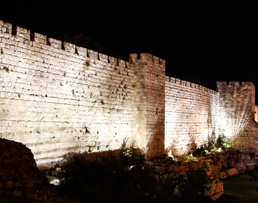 The Zohar states that the months of Tamuz and Av are times of grave danger for the Jewish nation. These months are times when evil has an opportunity to reign in the world. Harmful forces gain the upper hand and can roam the world and cause damage.

The 17th day of Tamuz is one of several communal fast days set forth by the sages. This was the day when Noach sent the dove out of the ark for the first time and the poor bird found no place to rest. We are told that the Jewish nation is compared to a dove. Symbolically, the bird lacking rest is echoed in our nation’s current state of affairs. From Shiva Asar B’Tamuz through Tisha B’Av, throughout the generations, we find our nation facing all kinds of tragedies time and again. These three weeks are called “Bayn Hamitzarim”, the space between two rocks, a place where one can get harmed and trapped.

Another event that occurred on the 17th day of Tamuz was when Moshe broke the Luchos. He had ascended to Heaven after the giving of the Torah to study and fully absorb all the details to the laws of the Torah. Moshe was to remain in heaven for forty days and nights and then descend with the written Tablets in hand. At that time, bad elements among our nation gained the upper hand and began worshipping a Golden Calf that they had fashioned with their own hands. As Moshe descended from the mountain, he saw a nation that had so recently reached the highest spiritual heights now depraved. Now they worshiped a golden creature. At that time, Moshe hurled the Luchos – the miraculous sapphire tablets inscribed with the “writing” of G-d – shattering them at the side of the mountain.

More troubles were to befall our nation. It was on this day that the sacrifices stopped being brought on the altar, shortly before the destruction of the First Temple. Up until the 17th of Tamuz, the Kohanim who were holed up in the Temple still had animals for Karbanos. However, on the 17th day of Tamuz, the altar went cold. There were no more animals available for the holy service.

Yet again, during the time leading up to the destruction of the Second Temple, tragedy befell our people. Once again, our enemies laid siege to the Holy City of Jerusalem. And finally, on the 17th day of Tamuz, Titus and his Roman hordes breached the city walls and overran the city.

Reasons For Fasting On Shiva Asar B’Tamuz
Five tragedies befell our people on the Seventeenth of Tammuz, as recorded in Tractate Taanis. It was due to these events that our sages instituted the fast of the Seventeenth of Tammuz. They were, 1) Moshe smashed the first set of Tablets when he descended from Mount Sinai after observing some of the people serving a golden calf. 2) During the siege of the First Temple, the enemies halted the daily offering of the Korban Tamid. This offering was discontinued until the rebuilding of the Second Temple. 3) Three weeks before the destruction of the Second Temple the walls of Jerusalem were breached. 4) A Greek general named Apostumos publicly burned a Torah scroll. 5) A graven image was placed inside the Temple.

Various activities were restricted during these Three Weeks as a form of mourning: