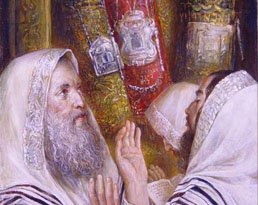 The Torah readings on Rosh Hashana pertain to ideas that are integral to the day. Because Rosh Hashana is a holiday, five people are called up to the Torah, which includes one Cohen and one Levi. If Rosh Hashana falls out on a Shabbos, seven are called up, as is the custom throughout the year. This does not include Maftir, which is the final portion read on Shabbos and Yom Tov, and is not included in the count of five or seven.

The Torah reading on the first day recalls how G-d remembers Sarah and she begets a child after waiting for many years. With time Sarah becomes worried that her son might be influenced by Yishmael’s bad behavior. Avraham banishes him and his mother Hagar from their home. When out in the wilderness their water supply runs dry, Yishmael becomes gravely ill and Hagar abandons Yishmael because she can’t bear to see him die. Hashem hears Yishmael’s cry and an angel instructs Hagar not to fear but to lift the boy because “shama Elokim el kol ha’na’ar ba’asher hoo sham” – G-d heard the voice of the lad in his present state. Now G-d allows Hagar to see a well, whereupon she draws water and saves her son’s life.

The concept of “ba’asher hoo sham” – the present state of the lad, ties into the theme of Rosh Hashana. Like Yishmael who sinned prior to his suffering, we too make mistakes. On Rosh Hashana day we come before our Creator to request mercy. If we are now sincere, then G-d looks not at our past or future. Rather, He focuses on our present state. While Yishmael’s descendants would cause the Jewish nation to suffer greatly, Yishmael himself was judged solely on his own merit at that point in time.

The reading on the second day is about the Akaida. Avraham was tested by G-d to see if his love for Him would transcend all else. Despite the staggering pain of slaughtering an only child, Avraham persevered. Every bone in Avraham’s body rebelled, yet his love for Hashem transcended all else. At the last second, an angel intervened and prevented Avraham from slaughtering his son. At that time, the angel of Hashem swore a mighty oath that Avraham’s progeny would become very great and would inherit the gate of its enemy. We learn from this story about the intense love we ought to have for G-d, as well as G-d’s everlasting love for the Jewish nation, which are descendants of Avraham.