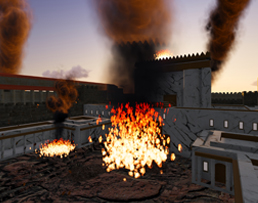 The 9th of Av is the anniversary of the most horrific episodes in Jewish history. Both Temples were burned on this day. The expulsion of the Jews of Spain occurred on this day. Germany began WWI on August 1, 1914 – which fell out on Tisha B’av. The Final Solution (ideas of for killing Jews during WWII) was formulated two days before Tisha B’av (the 7th of Av). In short, history demonstrates that this is a most pain-laden time for our people. Why is this so?

Way back, after our people had been forged into the nation of G-d, and when we were to go from the revelation at Sinai directly to the Promised Land, we transgressed. In the desert, we cried for no reason when the spies terrified us into not wanting to enter the Promised Land. At that time, G-d said, “this day when you cried for no valid reason, which is the ninth of Av, will be slated as the day for you to cry when you will have good cause to cry.” Punishments are often slated for our nation during this period.

In the synagogue, Megillas Eichah, the Book of Lamentations is read. The scroll tells of the destruction of the temple, the Jewish people, and the Holy Land. CLICK HERE FOR DOWNLOAD

We adhere to all the various laws of mourning for at least the first half of the day of Tisha B’av (until Chatzos which is the midway point of the day, at around 1 p.m.). Like someone who is sitting Shiva, we do not study Torah (except for the parts of Torah that are associated with the destruction of the temple). We do not sit on chairs or couches, work or do anything leisurely. We do not shower or bathe, and men do not put on Tefillin.

Unlike someone sitting Shiva, as soon as Chatzos has passed, right after the midway point of Tisha B’Av day, there is a strange custom. We begin to clean our homes. We demonstrate that even though we are going through a period of mourning, we still anticipate the arrival of Moshiach. That out of the darkest of places, we know with all our hearts that one day we will be everlasting joy.

In fact, we refer to this month, from hereon after, as Menachem Av. That is, a comforted month of Av. We express our prayer that all bad experiences will be transformed into good ones in the coming times of Moshiach. May we all be comforted speedily in our time!

Reasons For Fasting On Tishah B’Av
On this day five tragedies befell our nation. 1) During the time of Moshe Rabeinu, Jews in the desert accepted the slanderous report of the 10 Spies, and the decree was issued forbidding them from entering Eretz Yisrael. 2) The first Temple was destroyed by the Babylonians. 3) The second Temple was destroyed by the Romans. 4) The Romans captured the city of Beitar and slaughtered tens of thousands of Jews 5) Turnus Rufus – an exceptionally wicked man – plowed over the site of the Temple.
Laws Of Tishah B’Av
On Tisha B’Av all prohibitions associated with the Three Weeks and the Nine Days are in full force.
Well-known customs unique to this day include the prohibition against studying Torah, sitting on a chair (until midday), working, and greeting others.

Five prohibitions govern this day. On Tisha B’Av adults do not: