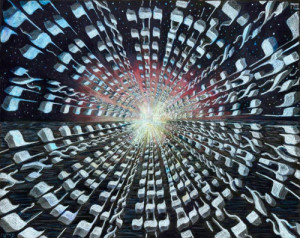 More than any other Tzedaka, supporting Torah provides you with ever lasting dividends.

Torah is “Meshivas Nufesh” – it changes a person. Multiply the impact when a young person learns, what an impact it has on many generations.

Torah is what shapes every Yid and all of Klal Yisroel. It is what kept us in the times of the “Misyavnim” and in contemporary Liberal World.

Supporting Torah is not a one-time Mitzva and Zechus. The learning that you enable multiplies many times over. One student effects the other and one group effects the whole Yeshiva. Every student eventually builds a family and every family can influence an entire community.

Supporting Torah is a “domino effect”, one push effects millions, and it is the greatest asset you can ever acquire for yourself and your family!

Excitingly Moshe Ortner went into the room of the Ruv Z”L in Tel Aviv to tell the Ruv that they assembled ten Bochurim to learn in the new Yeshivas Belz. With ten Bochurim in place the Ruv gave the okay to start the Zeman. The Yeshiva was headed by the Bilgoray’er Ruv and the Ruv Z”L directed every aspect of it, the Limudim, Shabbosim, lunches, and sleeping conditions.

Although in Belz there was the Yoshvim Institution and not a Yeshiva, the Ruv Z”L saw that after the war the way to rebuild and preserve the Avodah of Belz is only through a Yeshiva.

With the great Chasodim of Hashem, the Yeshiva grew exponentially over the years. Many thousands of Talmidim graduated, going on to shape the fabric of Chassidus around the world.

Today Belz educates an enormous network of schools and institutions. Together, they comprise one of the biggest Torah institutions in the world. Over 13,000 Bochurim, Yungerleit, Girls, and children are infused with Torah and Yiras Shamayim with the Chassidishe Bren.

A great emphasis is put on the Rebbeim and the staff. They are chosen from the finest in Belz and are well trained to be able to touch every student individually and invigorate a life-long dedication to Torah and Mitzvos.

When you support Belz Institutions, you become part of this ever-growing light.

With your generous donation you connect with the Tzadik who said “Baruch Hashem, I never stayed owing someone a favor.”

May you and your family enjoy rich and fulfilling lives with many years of success, prosperity, health, and much si’yata d’shmaya.