HISTORY AND CUSTOMS OF PURIM HOLIDAY

The 14th of Adar (this year Sunday, March 12th) is one of the most spiritual Jewish holidays (and the most fun one!). Purim is actually on a higher spiritual level than Yom Kippur, the Day of Judgment. How’s that possible? A day when we dress up and act silly, when we send gifts to each other, when it is all about a huge Purim party celebration, how is that all about our souls?

To explain, esteemed friends of Belz, we’re going on a learning journey to find out all about Purim and understand the Purim story.

Purim literally means lots (yes, just little gambling chits). It got its name from the actions of one wicked man
named Haman who threw lots to see what day to use to destroy the entire Jewish nation.

The Jews messed up by sinning way back when we had the First Temple in Israel. We got exiled to the Babylonian Empire. As Mark Twain pointed out, “”The Egyptian, the Babylonian, and the Persian rose, filled the planet with sound and splendor, then faded to dream-stuff and passed away.” At the time of the Purim miracle, the Babylonians were gone, replaced by the Persian/Mede Empire. King Achashveirosh, a common stable boy, had risen to power through brute force and by marrying the last princess of the previous empire. The Jews had a prophecy that after seventy years in exile, they would be returned to Israel, their homeland. The 70 years are winding down at the time the Purim story begins. 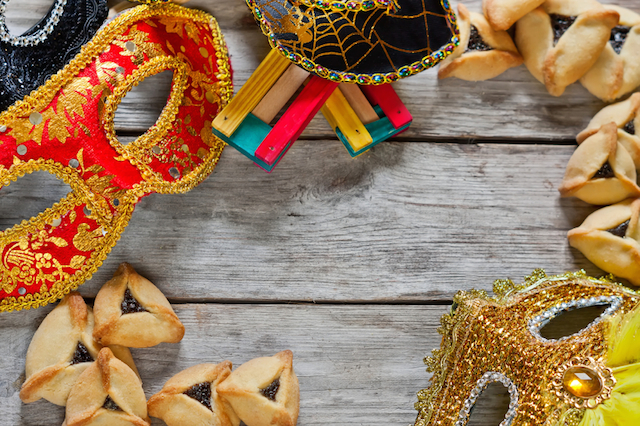 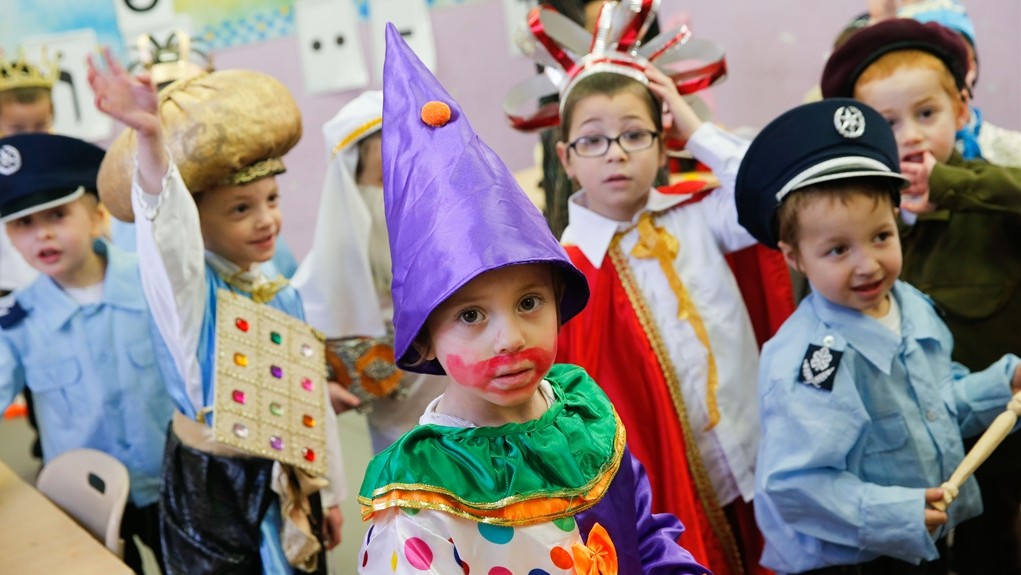 King Achashveirosh decides to throw a lavish party because according to his calculations the 70 years are up and the Jews are still in exile. He thinks down-trodden Jews are a cause to celebrate. He invites the Jews to his party to gloat over their continued pain and takes out the vessels captured from the Temple to debase the Jews even more. The Jews attend over the protestations of the Holy Man Mordechai.

At the party, Achashveirosh, in a drunken rage, has Vashti the Queen assassinated. When he wakes up, he is lonely. Girls from all over the world are brought to him, and among them the Jewish Esther. Esther is the girl Achashveirosh decides will be the new Queen and she doesn’t tell him she is Jewish. God always prepares the salvation before the painful problem. Esther becomes Queen, put into place to save the Jews, even before their lives are threatened.
Interlude: Mordechai, the Holy Man, overhears a plot between Bigsan and Seresh in which they plan to kill the king. Mordechai alerts Esther who alerts Achashveirosh. The king is saved and he has Mordechai’s act inscribed in a book called the “Book of Remembrances” where the king keeps tabs on who helped him.
Rise of Haman: Haman becomes powerful, second to the king. He enforces a rule that all must bow to him. Everyone quakes in fear to him, but not Mordechai. Mordechai worships and bows only to God. Haman decides to kill Mordechai…and the entire Jewish community. He gets Achashveirosh’s approval, throws lots to decide on a day of Jewicide, and even gets the royal signet ring to do as he pleases.

Jewish Repentance: Mordechai tells Esther she is to be the savior of the Jews. He assembles the Jews and helps them repent. Esther invites Achashvairosh and Haman to a party. The wheel of power starts turning badly for Haman. Achashvairosh remembers Mordechai saving his life and makes Haman give Mordechai honor. Esther, at a second party that she hosts for Achashvairosh and Haman, reveals she is Jewish and asks that her nation be saved. Haman is hanged for trying to kill the Jews. Mordechai rises to Haman’s post. The Jew are given permission to defend themselves..and do so brilliantly and successfully. When the fight is over, it is Purim Day and the Jews celebrate by: eating, sending gifts…and promising to accept God’s laws with happiness and complete commitment and to be a unified nation. Since Purim is a time of joy and acceptance of God in a full unity of the nation, that is what makes it the holiest of days for the Jewish nation.

HOW TO OBSERVE PURIM

There are four “mems” four main observances required on Purim

We need to hear the reading of the Book of Esther, also called Megillas Esther (from a kosher scroll) twice, once at night and once during the day. We do this before the other Mitzvos of Purim.
Download a copy of the Megilla here

We need to give $$ to two poor people. Here’s your chance to let your gifts to the poor be distributed by Belz in Israel.
Click here to allocate money to Matanos L’Evyonim

We need to send two food items to ONE friend. The food in the Purim gift basket has to be ready-to-eat food. Shalach Manos is a way to promote unity and good-cheer in the nation. There are some who will send, not just food, but also valuable gifts, too. If you would like to send a Purim basket easily, you can order from this website an elegant Shalach Manos…and 15% of your purchase price will be
donated to Belz institutions
. Get a double-Mitzva when you order your Purim gift baskets here.
Oh! Nuts

We need to have a festive meal, also sometimes referred to as the Purim Seudah. Basically, you are commanded to eat and be merry. Go ahead, plan your Purim party. If you need dessert options for the Purim party, you can order it also at Oh! Nuts and 15% of your order purchase price will be donated to our institutions’ holy work.
Oh! Nuts

MORE DETAILED EXPLANATION OF COSTUMES AND MASKS ON PURIM

The rabbis asked, ‘Where in the written Torah do we find an allusion to the story of Esther?’ You see, everything in the world, all the history and events, are coded in the written Torah. Therefore, there has to be an allusion to Esther somewhere in the verses. And the rabbis answer, in Devarim (Deuteronomy), Chapter 31, verse 18, where G-d says “I will definitely conceal (hester astir) My face on that day.” [referring to the day on which the Jews will sin.] There are times in history that we are told there is “hester panim” a time when, so to speak, G-d’s face is hidden. That usually happens when we turn from G-d. My father, a Holocaust survivor, always told us kids, “When people say where was G-d during the Holocaust, you should answer them, exactly where the people wanted him to be, distant. You see before the Holocaust, when it came to keeping Mitzvos, we didn’t want G-d looking into our lives, supervising our lives, checking in to see what we were doing. We wanted a distant G-d. So G-d showed us distance.” That is the way of G-d – He lets us set the parameters of our relationship with Him. You want Him close, fine. You want G-d out of your bedroom and out of your kitchen, He distances himself. Here at this junction in history, when the Jews thought they were never going back to Israel, they took a step away from G-d, going to celebrate and assimilate. At that point, G-d, as promised in Deuteronomy, decided “hester astir” to hide and allow danger to threaten the Jews.

In Megillas Esther, there is that “hester”, G-d’s name is not mentioned once in the Megillah. It was the greatness of the Jews that they recognized through the hidden curtain, through the gauzy coverings of history and events, there was the clear outline of a Divine Creator who orchestrated every event. That was their repentance, to pierce the mysterious, frightening things happening to them and say, “there is naught other than G-d.”

That leads into the custom of wearing masks and costumes on Purim, to remind us that nothing is what it seems at first glance. A bandit comes into your house, his face puckered up with meanness. Then you remove his mask and reveal your friend behind the mask. Once you’ve figured out who is hiding behind the mask, the hiding party usually won’t replace the mask, for you won’t be fooled any longer.

G-d is masked in seeming happenstance, in history, in nature, in life’s circumstances. It is up to us to ascertain that all the manifestations of these events are G-d driven, to, so to speak, SEE G-d behind every scene. And when we do that, G-d doesn’t have to conceal Himself any longer, for we recognize Him and want the relationship with Him. 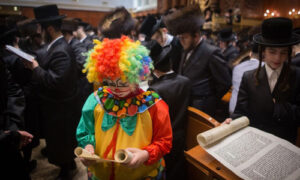 To show G-d “masked” Himself in the story and the Jews saw through the Mask and found the Director behind the film of events. 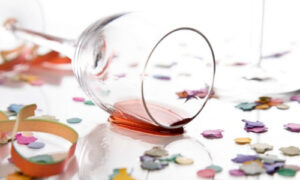 Yeah, much of the party happened with folks drunk, hence, we imbibe. But never too much. Drink Responsibly. Click here for a Safety Message from Hatzala 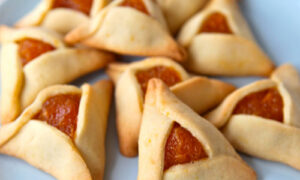 Those folded over pastries hiding good things inside are enjoyed on Purim. This traditional Purim pastry shows that good things are sometimes hidden within more complex structures of happenstance. Order delicious Hamataschen in every flavor and size by the bulk at Oh! Nuts and 15% of your purchase price will be donated to Belz Institutions.Oh! Nuts 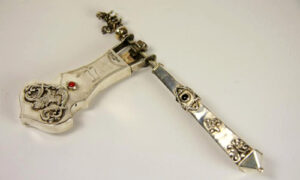 When Haman’s name is mentioned, we whirl around this noisemaking tool or drown out the sound of his name with any means at our disposal. Gragger and dreidel — these are very similar toys for different holidays signifying the lesson of the holiday. Gragger you swing from below and the noise comes out on top. At times, we must do things down here on Earth to create the results from G-d. In the Purim story, the Jews had to repent sincerely to get G-d to forward to them a full redemption. What are you doing down here on earth this year to affect Heavenly realms? Why not partner with Belz to do great spiritual things. Donate here